What is a bitter?

According to Wiki, ‘A bitter is an alcoholic beverage that is flavored with herbal essences and has a bitter or bittersweet flavor. There are numerous brands of bitters that were formerly marketed as patent medicines but are now considered to be digestifs, rather than medicines. They commonly have an alcoholic strength of 45% ABV and are used as digestifs and as flavoring in cocktails.’

Everyone has heard of Angostura bitters, its been around since 1824.
but what about the Bitter Brothers Fee, or Fee Brothers? Recently launched ‘The Bitter Truth’ even brings more to the table. ‘Urban Moonshine’ offers up bitters and tinctures, made in Vermont. We can’t forget Peychaud’s Bitters, Bittermens Bitters or Regans’ Orange Bitters No.6. From what we hear from those that tend bar, they come by our store because of this selection that seems to be growing weekly.

We are happy to announce that we have just received our first shipment of bitters from The Bitter End in Santa Fe:

“A revolutionary new ingredient for the modern bar, The Bitter End bitters give standard bitters a radical twist. Use our superconcentrated Mexican Mole, Jamaican Jerk, Memphis Barbeque, Moroccan, and Thai elixirs to enhance classic cocktails with a surprising kick. But don’t stop there. With their distinctive aromas and intense, complex flavors, The Bitter End bitters are the building blocks for a world of adventurous new cocktails.” 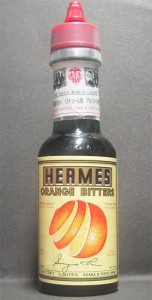 If you see Ed’s dog, Tip, dressed in a snazzy sweater and a scowl, you can bet Mr. Ed has him going out on a mission to hunt down these illusive bitters, Hermes Orange and Hermes Aromatic Bitters.